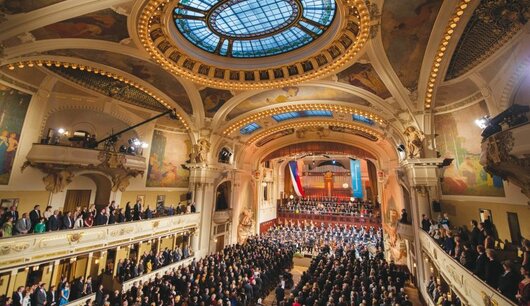 Smetana Hall, centrally located and accessible from the first-floor foyer, represents the largest area of the Municipal House. The name of the concert hall is Prague’s tribute to the creator of modern Czech music – Bedřich Smetana. Of the sculpted decoration, Ladislav Šaloun’s stucco groups called Vyšehrad and Slavonic Dances, placed along the sides of the stage, particularly stand out, also commemorating the other brilliant Czech composer, Antonín Dvořák. Smetana’s Vyšehrad from the cycle of symphonic poems My Country is represented by the mythical figure of Lumír, narrating the legend of the homeland to harp accompaniment, while the dancing couple located on the opposite side is a motif from Dvořák’s Slavonic Dances. Smetana Hall’s interior features also other Czech composers whose portrait medallions embellish the box parapets and the parapet of the main balcony.

Ceiling and mural paintings by Karel Špillar also contribute to the generally airy and festive impression of this hall. In particular, his monumental murals Music, Poetry, Dance and Drama are some of the painter’s best works.

Smetana Hall is primarily a concert hall with a capacity of 1,200 seats, which has hosted some of the most prominent international music ensembles and performers since its opening. In addition to concerts, it also hosts various events, such as traditional balls or galas. It is also the venue for the Prague Spring International Music Festival’s opening and closing concerts.