The Giants of Film Music 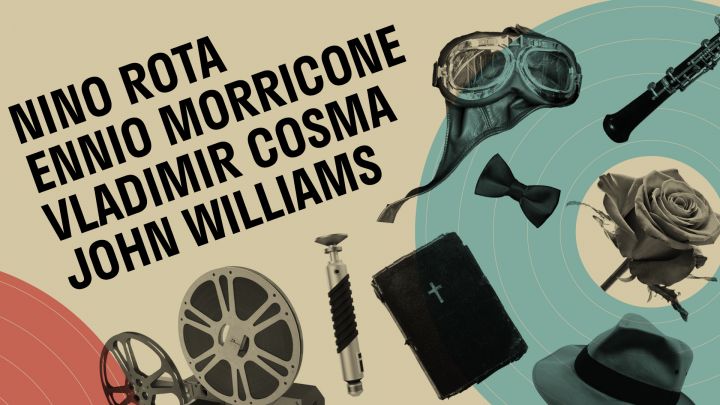 The Giants of the Film Music – this is the title of a concert we’re putting together for you on the last Tuesday of October this year. What legends might these be? The very best of course. Think timeless composer heroes such as Nino Rota, Ennio Morricone, Vladimir Cosma and John Williams.
Their melodies are known to silver screen fans around the world, and are testament to the fact that quality film music well and truly belongs in concert halls just as much as any other music. What's more, many movies owe their box office success stories precisely to the music featuring within them.  From the usual synchronisations of dramatic events playing out on the screen together with particular moments in the score, such fundamental works emerged that will forever retain their primacy. Examples include melodies from from Once Upon a Time in the West, Indiana Jones and The Raiders of the Lost Ark, Star Wars: Episode IV – A New Hope, The Godfather and The Tall Blond Man with One Black Shoe.

Headed by its music director Steven Mercurio, on 25th October 2022 listeners can look forward to hearing the Czech National Symphony Orchestra perform these delights and more, all set against the backdrop of the beautiful Smetana Hall of Prague’s Municipal House.

Album for The Giants of Film Music