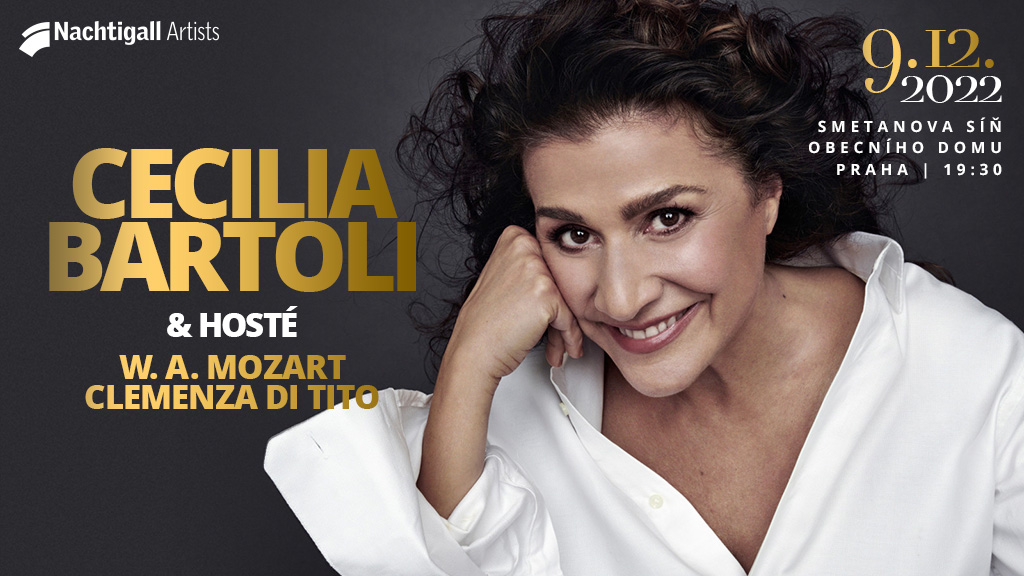 The Roman Capitol is on fire, terror is rampant! A wild desire for revenge and the throne drives the daughter of the overthrown Emperor Vitellius to force her suitor Sesto to burn Rome and assassinate Emperor Titus. A story full of betrayal, love, passion, but also cruel remorse, despair, and guilt, which results into a happy ending. How could it not, when Emperor Titus is known for his generosity and mercy: he forgives all who have sinned against him! This is Mozart's coronation opera La clemenza di Tito, which had its world premiere on 6th September 1791 at the Estates Theater in Prague.

Praguers who understand not only Mozart, but also Cecilia Bartoli will see the last concert performance of this opera as part of a European tour with an absolutely stellar cast. The famous orchestra Les Musiciens du Prince Monaco under the direction of conductor Gianluca Capuan will accompany six wonderful soloists, of course, led by Cecilia. The most famous European halls will see 8 concert performances and we are very happy that the whole tour will conclude in Prague.

Even when hard at work rehearsing, Cecilia Bartoli lives up to her nickname 'La Gioiosa,' the joyful one. The famous Italian coloratura mezzo-soprano has become a role model for a whole generation of young musicians: with her vocal mastery, extraordinary acting, infectious enthusiasm, and openness. She discovered many musical gems that have been unjustly forgotten over the centuries. She has been a guest of the Nachtigall Artists’ World Opera Stars Series several times since 2008 and has always offered unusual projects. Since 2012, she has been the artistic director of the Whitsun Festival in Salzburg, and in 2023 she will become the first woman in the history of the Opéra de Monte-Carlo to take over the director's chair. The role of Sesto is one of her signature roles.

In other roles, we will hear excellent singers, too, led by the superb American tenor John Osborn (Tito), who is a welcome guest on prestigious opera stages, including the Metropolitan Opera in New York, Milan's La Scala, London's Covent Garden, and the Vienna State Opera. The young Egyptian soprano Fatma Said (Vitellia) was described by the Frankfurter Allgemeine Zeitung as a discovery of the contemporary opera scene, following her sensational debut at Milan's La Scala in 2016 as Mozart's Pamina (Magic Flute). The young German American mezzo-soprano Siena Licht Miller (Annio) will be a soloist at the Zurich Opera from the 2022/23 season. The French soprano Mélissa Petit made her debut at the Salzburg Whitsun Festival in 2021, among others as Mozart's Servilia. The renowned Hungarian bass baritone Peter Kálmán also made his appearance at the Whitsun Festival 2021 as Publio in the same project and, in the role of Oroves, participated in the production of Bellini's Norma with Cecilia Bartoli in the title role (Salzburg, Paris, Baden-Baden and Monte Carlo).

The ensemble Les Musiciens du Prince-Monaco was formed in the spring of 2016 per the initiative of Cecilia Bartoli and in collaboration with the director of the Opera de Monte-Carlo, Jean-Louis Grinda. The project received the immediate support of Prince Albert II of Monaco, and Princess Caroline of Hanover. Under the supervision of their artistic director Cecilia Bartoli, the best musicians from all over the world came together to create an orchestra modeled on the foundation of ensembles which used to be playing in European royal, princely and tsarist courts in the 17th and 18th centuries. In its six years of existence, the ensemble has established itself on prestigious European stages, including the festival in Salzburg. The ensemble Il Canto di Orfeo was founded in 2005 by the Italian conductor Gianluca Capuano, who became the chief conductor of Les Musicients du Prince Monaco in 2019. He has performed at the Vienna State Opera, the Zurich Opera and the Bavarian State Opera and conducted Bellini's Norma with Cecilia Bartoli at the Edinburgh Festival, the Théâtre des Champs-Élysées in Paris, and the Festspielhaus in Baden-Baden.