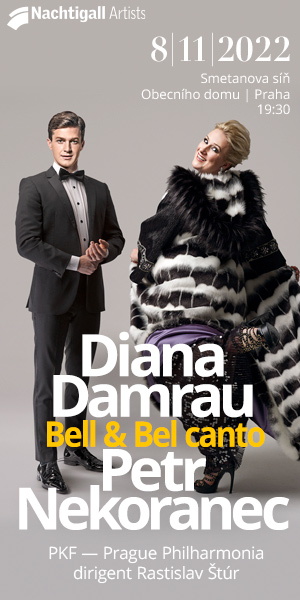 Over the last few years, the British composer Iain Bell has been writing arias tailored to Diana Damrau and Petr Nekoranec, and they are recording them on an ongoing basis. Now it's time to show them together in front of live audience!

In the second part of the concert, they will perform in roles in which the audience knows them the best, i.e., in the roles of peak of the Italian Bel canto. Iain Bell presented his works in leading opera houses and concert halls, incl. Carnegie Hall, the Royal Opera House in Covent Garden, the Munich Opera Festival, Theatre an der Wien, the Houston Grand Opera, Wigmore Hall, the Enescu Festival, the BBC Proms, the New York City Opera, and the English National Opera. Apart from Diana and Peter, he collaborates with Gianandrea Noseda, Carlo Rizzi, Stuart Skelton, Jamie Barton and the BBC Symphony Orchestra.

His vocal work is based on the Bel canto tradition; vocal virtuosity is the only possible way of deep expression to him. He combines his dexterous vocal lines with a deeply colored harmonic and orchestral language, reminiscent of the French school. This sound-world fits perfectly with the themes that his works so often explore, namely the idea of beauty in darkness and darkness in beauty.

Soprano Diana Damrau has been performing in the world's leading opera houses and concert stages for over two decades. Her extensive repertoire includes lyrical soprano and coloratura roles, including title roles of Lucia di Lammermoor (La Scala, Bavarian State Opera, Metropolitan Opera, Royal Opera), Manon (Vienna State Opera, Metropolitan Opera), La Traviata (La Scala, Metropolitan Opera, Royal Opera House, Opéra national de Paris and the Bavarian State Opera) as well as the Queen of the Night in the Die Zauberflöte. The Kammersanger of the Bavarian State Opera and holder of the Bavarian Maximilian Order to reward outstanding achievements in the fields of science and art has had a fantastic season. She made her debut in the title role of Donizetti’s Anna Bolena in the new production of this opera in Zurich; this spring, she will tour around Europe with Jonas Kaufmann, and she will debut in Strauss’ Capriccio in Munich. Local audience was able to enjoy her vocal and drama art within the MET in HD series as Gilda, Rossina, Adéle, Leila, and Violetta. She made her Prague debut at Nachtigall Artists invitation in 2014.

Tenor Petr Nekoranec is one of the most prominent hopes of the young Czech singing generation. In the years 2018–2020, he was a soloist at the Stuttgart State Opera, where he assumed the roles of Almaviva (Il barbiere di Siviglia), Ramiro (La Cenerentola), and Ernesto (Don Pasquale). In the autumn of 2019, his profile album French Arias (Supraphon; Czech Philharmonic, conductor Christopher Franklin) was released. As a soloist at the Opera of the National Theatre in Prague, he assumed the role of Count Almaviva in a new production of Il barbiere di Siviglia in October 2021; in January 2022, he was also Ferrando (Così fan tutte). He returns to the State Opera Stuttgart in the role of Yurodivyy (Boris Godunov), to National Theare Brno as Tamino (Die Zauberflöte) and in May 2022, he will assume the role of Almaviva in the opera house in Toulouse. In May he will also be heard for the first time by an audience in Brazil and in October he will debut in the Teatro del Maggio Musicale Fiorentino alongside Cecilia Bartoli. In 2016–2018, Petr Nekoranec was a participant of the Lindemann Program at the New York Metropolitan Opera, the first Czech to be accepted into this important project. In 2014–2016 he was a member of the Bavarian State Opera in Munich and its opera studio. He is a laureate of a number of prestigious European competitions, including the Francesco Viñas International Competition.